February 6, 2018January 12, 2019 Diamond
The Stones are continuing their board games! This is the next part, there will be three parts. We left of with the four bears beginning their game of Life. So, let’s get started!

The Stone children set up the board game. Cali was first to pick her color car.
“Hmmm, let me think,” she began, deep in thought.

Cloud leaped over. “Leave the blue one for me! I always pick blue!” he claimed the blue car as his own.

Cali chose the white one, letting Cloud pick the blue one.

Candy was left with either green or yellow. “I’ll pick yellow,” she sighed.

Cloud had gotten his way, and his siblings let him have the blue car. He was definitely glad about that.
As everyone placed their people in the car, Cali noticed that Candy put her peg on the wrong side.

As the game began, the four children decided whether to go to college or not. Cherry and Candy decided to jump right in and pick a job. Cali and Cloud, however, did what their parents had always taught them to do – get a good education.

Cherry picked her career card. “Oh goody!” she exclaimed. “I get to be a police officer!”

Candy was next to chose her card. “I get to be a salesperson. How cool, because I could actually do that in real life,” Candy noted.

Cherry, on the other hand, was displeased with her salary. “$30,000? That’s like the lowest possible salary!” Cherry exclaimed. She was doomed to lose with that salary.

Cali got to pick her career. She was a technician with a $50,000 salary. “That’s pretty good,” she noted.
“That’s my favorite job,” Diamond added. “Whenever the spinner comes of track, you automatically get $50,000.”
“Sweet!’ Cali replied.

A second later, Candy’s husband was added to her car. This was exciting to her.

Finally, it was Cloud’s turn to chose a career.

“I hope I get something good,” he wished.

He flipped over his card. “A teacher? Who would want to be a teacher, that’s dumb,” Cloud exclaimed.
“Hey!” Cherry retorted. “I think being a teacher would be a fun job.”
“Whatever,” Cloud sighed. “At least I get to pick a second job.”

His second job was an entertainer.

Cali got to a Lost! Miss next turn. space. “Aw man,” she complained. “Now I’ll be behind.”

Candy made it to choose a house. “Do you want to buy a house?” Diamond asked.
“Do I ever!” Candy replied. “I just don’t want to be stuck with a dumb house.”

She flipped over her house. “Ugh,” she responded. “I don’t want this house.”

When she flipped over her next card, she quickly changed her mind.

“I’ll take this house,” she muttered. 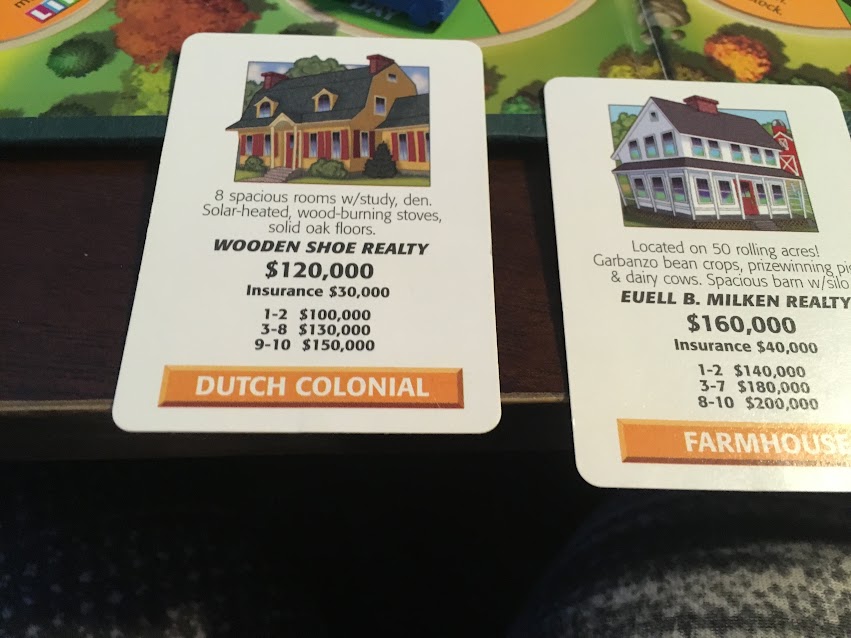 Cherry quickly got to choose her house. “Hmm, these are both to pricey for me,” Cherry decided.
“Ugh,” Candy complained. “Why did you get the good cards?”
“Well, I don’t want to be homeless,” Cherry decided.

So she chose the Dutch Colonial house. It was the cheaper option.

A second 8 was spun which meant Cloud got to change salary cards.

Cherry landed on the twin space. It must run in the family, being that Cherry herself is a twin.

She got twin girls.

It was Cloud’s turn to buy a house.

He still had student loans, so he opted to not buy a house.

Cali got to the point where she could get married. “I don’t need a man,” she said, independently.
“Cali, it’s just a part of the game,” Cherry convinced her.

“I don’t need a man in my life,” Cali rebutted.

A second later, Cali changed her mind. “I’ll get a nice husband,” she hoped.

Cherry landed on a baby girl space. Diamond tossed a girl peg onto the game board.

“Just kidding,” she reassured everyone. “She’s safely in her car seat in the back of the car.”

The spinner got stuck between numbers.

Since Cali was a Computer Consultant, she got to nudge it back into place and she gained $50,000 from this.

“Oh yeah, keep the money coming!” Cloud was feeling pretty good about the game. At this point, he thought he was going to win.

Candy landed on an Art auction space. “Why do I have to pay this?” she rolled her eyes. “I don’t even like art.”

Cloud spun and moved to a Baby boy! space. “Boys rule,” he commented.

Soon, Cali landed on a buy house space. She picked two cards. “Hmmm,” she thought. “I have to chose between the house I want and the house I can afford…”
Ooh, cliffhanger! We shall find out which house Cali chose in the next part!
What’s your favorite board game?