Hello friends! Camp Happy Heart is drawing to a close and I’m sad about it! But don’t worry, it’s coming back next year. And I do have some cool stuff planned this fall. So, it’ll be okay.

Anyway, today the campers had a color war! But I won’t say any more than that…you’ll have to read the post!

I plucked at the green headband atop my head. Camp Happy Heart was nearly over, and to celebrate, we were having a color war. It seemed really fun, and I had been excited at first. But that was before I found out that teams would be random, not within our cabins. I knew that it was just to be fair, but I still wished I could’ve been with my friends.

My team…wasn’t bad. But, it did consist of my dueling siblings’ Chip and Sandy, the ever-competitive Cam, and Tye.

“Great,” I muttered to myself. Sure I wanted to win, but I mostly just wanted to have fun. I knew Cam was sure to spoil the fun. He taunted so much that it somewhat ruined Bear-lympic week. He was so set on winning, and good for him, he did. It didn’t feel good to be on the losing team against him. I doubted it felt any better to be on the winning team with him.

“I am NOT doing the three-legged race with him!” Sandy yelled.

“You guys are similar heights! You’d be perfect for it,” Cam reasoned.

I shared a look with Tye. 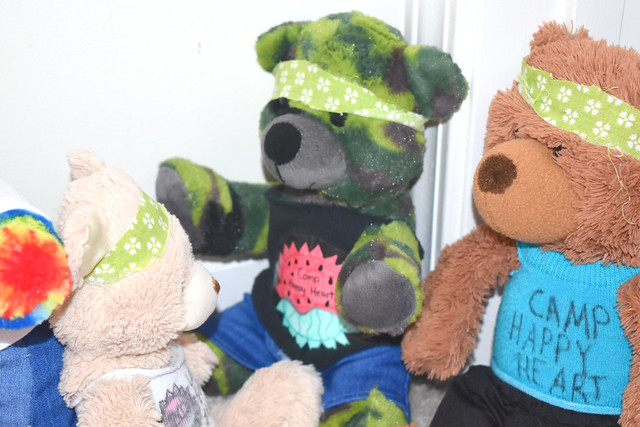 “Can you just put aside your differences for a few hours? We need to win this!” Cam begged.

Sandy rolled her eyes and Chip sighed, “I guess.”

Cam grinned a toothy smile. “Awesome! So you two can do the three-legged race, and then we’ll all participate in the capture the flag and tug of war. Not to sound conceited, but I truly believe we have a shot at winning this thing.”

I glared at the floor. I didn’t care about winning! I just wanted to have a good time.

“Three-legged race contestants, please come to the Counselor’s station so we can get you ready for the race!” Teacup shouted into the megaphone.

Chip and Sandy reluctantly did so. The rest of our team took our place along the sidelines.

After a few moments of the counselors tying legs together, the contestants were ready to begin.

With that, the teams began running, as fast as they could with their legs tied together.

Despite their rivalry, Chip and Sandy made a good team. It wasn’t long before they overtook the other teams.

“YEAHHHHH!” Cam yelled. I covered my ears. I hadn’t known it was possible for a single bear to reach such a volume.

Cam certainly wasn’t excited for no reason. Chip and Sandy had just broken the ribbon and won the race. A small part of me felt excited to see that my team was winning, but then I felt bad for the other teams who had to compete against Cam.

Cam ran up to join Chip and Sandy.

“That’s right! You other teams better watch out, because you don’t stand a chance against us!”

I hid my head in embarrassment as members of other teams glared at me.

Summer shooed Cam off the stage.

“I’d like to say that everyone else has a chance at winning still! There are still two more events.” she encouraged. “With that being said, it’s time for capture the flag! Each team will be given a flag and then you will have 15 minutes to make a plan and hide your flag. Starting…now!”

Cam grabbed our green flag and gathered our team.

“Where should we hide our flag?” Tye asked.

“How does capture the flag even work with four teams?” Sandy pondered.

“The goal is to not get your flag captured instead of capturing the other teams’ flags. When your team’s flag gets captured, you’re out. So, we need to hide our flag in a really good spot! I think we have the advantage because our flag is green,” Cam explained.

I groaned. There goes Cam thinking about winning again.

“Whatever,” I replied. “Where do we want to hide this thing?”

“I already have the perfect place,” Cam bragged.

Why was I surprised? Or course Cam had a plan to win.

Cam instructed us to serve as a decoy and pretend to hide the flag.

“Is this really necessary?” I asked as he handed me the imaginary flag.

I fought back a groan.

“Where are you hiding the real flag?” Chip asked.

“Mm, can’t tell you that,” Cam replied. “The enemies might coax the information out of you.”

“It’s not that serious,” Tye remarked.

“This is serious. This is about winning.”

The other four of us shared a glance.

“I hate to break it to you Cam, but it’s actually about having fun,” Sandy corrected.

“As much as I hate to agree with my annoying sister, she’s right on this one bud…” Chip hesitantly agreed.

“No, Cam!” I shouted. “You always do this! These games are about having fun. Focusing on winning just sucks the fun out of it for everyone else.”

Cam was astonished. “But it’s fun to win!”

“It can be,” Chip added. “But it’s more of a fun bonus. If you’re focused on winning, then you only have fun if you win.”

“Well, let’s do it your way then,” Cam sighed. “I do want to win, but not at the expense of everyone’s fun.”

I grinned. Maybe this wouldn’t be so bad after all.

“You may begin capturing the flag!” Teacup announced.

I gulped when I realized that Cam was still holding the flag. Since it was against the rules for a person to protect the flag for an extended period of time, Cam had no choice but to drop the flag on the ground.

It was a good thing Cam let go of his need to win.

As was expected, our flag was the first one to be found. We were out of the capture the flag event quickly.

“At least we won the three-legged race!” Tye noted. He was a generally positive person.

“What’s our plan for tug of war?” I asked, changing the subject.

Cam perked up. “I think we’ve got the advantage on this one. Aside from the fact that I’m pretty strong, we also have three boys, while the other teams have two. Not to be sexist, but boys are typically stronger than girls.”

Sandy and I shared a look. He wasn’t necessarily wrong, but I knew a few girls who were much stronger than some boys.

“Cali, you can be in front. You’re the smallest, so it’ll be best if you’re up in the front. Then Sandy, Tye, Chip, and me. Sound good?”

I shrugged. His plan made sense to me. All that was left to do now was wait for capture the flag to end.

“The Yellow Team wins!” Summer cheered. I was happy for them. I was even happier that it was nearly time for our last event. Given that we’d won the first event, we had a fairly good chance at winning the whole color war. All we had to do was win tug of war.

The counselors assigned our opponents. Our first opponent would be the Blue Team.

A twinge of pity swelled in my heart. Rudy and Claire were both on that team. I loved my cousins, but they sure were petite. I didn’t think they stood much of a chance against us.

Surprisingly, Blue Team put up quite a fight. The rope strained with tension as both teams pulled with all their might. But Cam was still right about us having the advantage. We were soon able to pull Blue Team over the line with our combined strength.

Beside us, Red Team beat Yellow Team. I took a deep breath. It would be hard to compete against them, but if anyone could do it, we could.

It only took a few moments for both teams to regain their positions on each end of the rope. Just as the counselors were about to announce “go!”, Cam glanced at us and whispered, “have fun!”

I was proud of him. He’d managed to put aside his desire to win for the final two events. It had made the experience so much richer.

This time, the tugging lasted longer. At times, it was unclear which team would triumph over the other. The battle seemed long, though it only lasted a few minutes.

I looked over at my team. Cheerful faces greeted me. I looked towards the other teams. Even though they hadn’t won, most of them knew the lesson we’d taught Cam today. Winning was fun, but it wasn’t everything. Having fun was more important.

P.S. Come back tomorrow for the collection of reader photos! Also, make sure to send in any photos before 12 p.m. est tomorrow! They go to worldofagdollsblog(at)gmail(dot)com!