I’ve been at my grandma’s house for the past few weeks. There will be more on that later for sure, but that’s pertinent to this post for a couple of reasons. A) I’m not at home and therefore can’t do my planned posts, B) I’ve been on a roller coaster of emotions lately, C) the backgrounds and stuff are different than normal, and D) the first ever Sparkles/Mischief photostory was completed here at my grandma’s house and it’s made me really nostalgic for that time.

I’m not entirely sure why I love writing about Mischief and Sparkles so much, but I feel like part of it has to do with the fact that they’re the first set of siblings I really wrote about. Yes, I wrote about the seven Stone children for a while, but Mischief and Sparkles relationship just feels more raw and real. Yes, they fight, but underneath all that, they love each other immensely. It’s the type of thing I’ve always wanted in my life.

Yes, if you didn’t guess already, I’m an only child. So I technically have no idea if I’m getting any of this sibling stuff right.

As long as I can remember, I’ve longed for a sibling. Sister, brother, younger, older, I really didn’t care. I just wanted to not be alone anymore. But…that’s just not going to happen for me. I’ll never have a real sibling relationship. I’ve struggled with this for a long time, and I guess writing stories about sibling bonds helps me cope a little. This is the closest I’ll ever get to having a sibling.

Anyway, I don’t mean to come across as upset or anything. I know that my parents did the best they could. I just constantly find my mind wandering to what could have been.

Whew, that was a bit of a personal ramble. What were we even here about? Oh! Right! Mischief and Sparkles!

Since I’ve been at my grandma’s, I kept feeling the urge to make a photostory. My inspiration was running a little dry, but I kept coming back to “Pranks and Punishments,” a photostory that I made here a few years ago. I remember having the best time with that photostory, and I knew I wanted to write something about Mischief and Sparkles.

I eventually figured out that I wanted them to have a short conversation, and they could cover some things I wanted to address soon anyway. I knew I was about to take Sparkles on a short trip, so I figured that her packing would be a good place to start.

Once I started typing, the words just poured out of my soul and onto my computer screen. That’s how it is a lot with my writings, I don’t think them out, I just do. It’s a miracle that my writings are even comprhensible. This one felt especially personal. It was like the roller coaster of emotions that I’ve been feeling lately splattered onto the page. This turned out to be much longer than I’d anticipated, and much different. Not that I’m complaining about that.

Anyway, this intro has probably exceeded the length of the actual photostory. I swear
I’m not trying to bore you. I just felt like you all needed some sort of explanation behind this post.

My eyes glinted with the hint of a smile, but I didn’t overdo it.

“I’ll only be gone a couple days,”

He let out a soft sigh. “I know, but you’re my little sister. We haven’t been apart for more than a couple hours since 2018.”

My mind wandered to our early relationship. Our personalities may have clashed when Mom first adopted me.

“There was a time when you’d have loved getting a weekend away from me,” I recalled.

Mischief wrapped his arm around my shoulder. “I never felt that way.”

“There really is just something in my eye! It must have gotten under my glasses.”

I sighed, folding up a jacket.

“Remember when we first came here?”

“How could I forget? It was then that you stopped hating me,” he glanced out at the night sky.

I grinned. “I never hated you Mischief. I just didn’t understand you.”

“Things seemed so much simpler then,” I complained. “I wish we could go back.”

“I do too sometimes,” he admitted. “But we can’t. We just have to make the best of what we’ve got.”

I pulled my brother in a warm embrace. Typically, I wasn’t a touchy feely person, but I did enjoy affection with my family members.

“Do you ever worry that we aren’t enough for Mom?” Mischief asked, looking up with glassy eyes.

I shook my head. “The thought’s never crossed my mind. Why do you think that?”

He sighed. “I never told you this, but remember that one time I snuck out a couple years ago?”

I sorted through my memories. Though my brother was true to his name, I only ever remember him sneaking out once. “Yeah. Aunt Peri was so mad,” I giggled. “She made you relinquish your lucky whoopee cushion.”

He made a silly face. “I stole it back within a week though.”

We shared a smile before returning to our serious expressions.

“I snuck out to see what Mom was doing. And…” he trailed off. “She was at a dating thing.”

My mother was many things, but I just couldn’t picture her as someone’s girlfriend. The whole reason she adopted us was because she doubted that she’d ever get married. Her priority was education, and then her work, until we came along. As far as I had known, she had never even been on a date.

He nodded. “She caught me there and gave me some mushy crap about how we were all she’d ever wanted out of life. But ever since, I’ve worried that she’s just going to find some guy and leave us.”

“Mom would never,” I began. “Even if she started dating someone, we would always come first. I, for one, would be happy for her.

Mischief weakly met my eyes. “I guess. It’s easy to think like that when you’ve never had it happen to you before.”

I never knew exactly how Mischief came to live with Mom. Like me, he was adopted, but I’d never wanted to pry.

“Is that?” I asked, letting the last syllable hang in the air. Like I said, I didn’t want to pry.

He nodded, tears glinting in his eyes. “My mother abandoned me as soon as she started dating this new guy. She just dropped me off at school one day and never picked me up. It was then when I decided that unless I wanted to be left again, I needed to reinvent myself. It was that day that I decided to learn how to pull pranks. If I could make people laugh, then no one would ever leave me again.”

For the second time that day, I pulled my brother into a tight hug. “I promise I’ll never leave you.”

“Not that she would, but if Mom ever decided to start dating, I’d support it,” I added. “It’d be fun to have a dad. And I know she’d never pick anyone who wasn’t good to us.”

He nodded. “You’re right. When did you get so smart?”

I blushed. “I can’t tell if that’s a compliment or an insult.”

I looked down at my bags. “I’d forgotten I needed to pack.”

“Sorry for being so distracting,” Mischief stared at the ground.

“Don’t,” I placed my hand on his shoulder. “You aren’t a distraction. I needed this actually.”

“You can come to me anytime, you know that right? Even if we aren’t always together, you can call me,” I reassured him.

“I know. I love you Sparkles.”

“I don’t know,” he sighed. “I just…overthink a lot. But even if Mom finds someone, it’ll be a good thing, right?”

“I’d better finish packing,” I glanced at the ticking clock. It was much later than I’d anticipated staying up.” 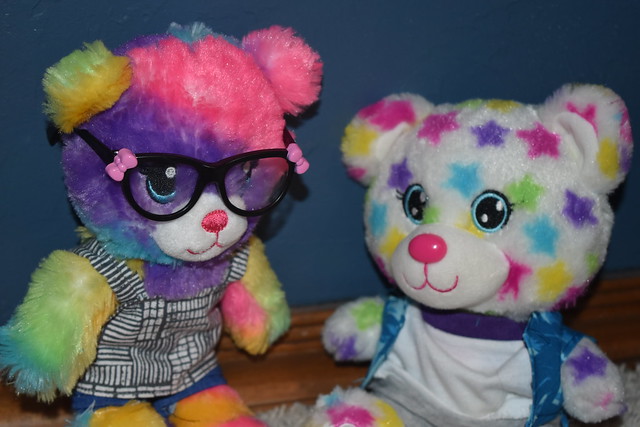 “Goodnight, love you too.”

I smiled. Mischief might be the biggest pain in the butt sometimes, but he was also my brother. The love I had for him was unlike anything I’d ever felt before, rivaled only by my love for Mom. My life might not have turned out perfectly, but I wouldn’t trade it for a second.

I only allowed myself to feel those strong emotions for a moment. My backpack lay empty on the floor. If I was ever going to be ready for my trip, I needed to pack. So I set off to work.

It didn’t take too terribly long to finish.

A smile crept across my exhausted face, and it didn’t leave until after my eyes fell shut.

9 thoughts on “Late Night Ponderings ~ A Mischief and Sparkles Photostory”

Join 434 other followers
Follow Build A Bears Furever on WordPress.com

Hey, I'm Diamond. I love sharing stories. Some of my best characters have their own blog featuring them: Build a Bears Furever. It might be "weird" that I have a stuffed animal blog, but to me, they're some of my most vivid and lifelike characters. If you enjoy stories of any genre, I recommend checking that blog out! You can check out my blogs below. I'm obsessed with all things Marvel, including Guardians of the Galaxy and Agents of S.H.I.E.L.D. I also enjoy Star Wars, and Disney. I love to travel, take photos, read, play video games, and I also bullet journal. Check out my blogs if you'd like to know more!