Hello friends! It’s been a while since our last Skipping Stones episode, so I’m really excited to share the next one! This one is set at Camp and it’s pretty fun…enjoy!

Campers gather around the schedule board. Sandy squeals in delight.

Cloud and Mischief peek around the bears crowding the board.

“What is it?” Mischief asks, not wanting to miss out on the excitement. “What’s going on?”

Sandy steps away from in front of the board and points. “On Friday, there’s a camp dance! But only for the older campers.

“See where it says ‘incoming middle schoolers and up’? That means the two of you aren’t invited.” She smirks. “We’ll have a grand time without all these little kids around.”

“I’m not that much younger than her,”

Cloud and Mischief share a glance. They know that together, they will find a way into that dance.

Friday, the day of the dance

Gisselle hands a piece of decor to her sister Adeline. Adeline hangs it from the ceiling. The pair help with decorating the main hall.

Adeline knows her sister better than anyone, which is why she can tell that something is wrong.

“What is bothering you Gisselle?” Adeline asks, eager to help her little sister.

“I need to help my sister…”

Gisselle gazes at the ground and sighs. “I just feel like I am not doing enough as a counselor-in-training. I want to do more, but I feel like I might not be able to.”

“Ne dis pas de bêtises!” Adeline scolds. “You are a great counselor-in-training. I know the perfect task for you.”

Gisselle perks up. “What is that?”

“You can be an usher for the camp dance tonight!”

Gisselle smiles as she accepts the assignment. She’s determined to prove that she will make a great camp counselor one day.

“I am going to be the best usher this camp has ever seen!”

“It’s not fair that we aren’t allowed in the camp dance tonight! This is ageism! I won’t stand for this!”

“You’re our genius,” Cloud directs his question to Mischief. “Got any bright ideas?”

Mischief strokes his chin. “Not at the moment. But I will think of something.”

Almost as if on cue, Chip enters the cabin.

“Hey guys,” he can barely say two words before he’s interrupted by the three younger campers.

“Can you sneak us into the dance tonight?” the three blurt out, almost in unison. But it isn’t in unison, so it sounds a bit strange.

“We’d really like to go!” Cloud begs. “It’s not fair that you guys get to go just because you’re older.

Chip stares at the boys, bewildered by their request. “To be honest, I don’t even want to go to the dance.”

“I hear that at the end of the night, the boys and girls are going to have one slow dance. With each other…blech!”

“You don’t?” Mischief gasps. “Then let us go in your place!”

“It isn’t that simple,” Chip waves out a ticket. “I only have one ticket. I could only get one of you in.”

Mischief smirks. “Just leave that to me…”

Do you have unruly children? Perhaps they need a bit of straightening up?

Cam’s Military School for Unruly Children might just do the trick! I’m Cam, and I know a thing or two about the military. I implement procedures that shape up your children.

“I used to be a prankster. But Cam’s program really helped me get my act together.”

You see? My program can tame even the wildest of children. And the best part is that all proceeds go to a good cause. I will be using them to go to boot camp, which will prepare me to join the army. I’ll be protecting the nation!

Gisselle smiles as she accepts the tickets of campers. The campers are all dressed in their very best clothing. Music is blaring from the building and she knows that the campers are all going to have a grand time. The sun starts to set, and darkness sets in.

Almost all of the campers have arrived, but Gisselle has one more name on her list. Chip Stone. She wonders where he is.

A tall bear holds out a ticket. “Ticket for Chip Stone.”

Gisselle looks at her clipboard. The name matches up. But this doesn’t sound quite like Chip.

She narrows her eyes at him. “You seem different today…”

“Something’s going on…I will get to the bottom of this.”

“Erm, I have a cold.” he sighs. “Nothing contagious, but just a little stuffed up.”

Gisselle raised her eyebrow. “I see. Well, I suppose you can go in.”

The tall bear enters the dance, with Gisselle stealthily following.

“Quit putting all your weight on my shoulders,” Cloud groans.

Oswald shifts his weight. “What else am I supposed to do? Mischief’s fat butt is on my shoulders.”

“This is going to be a long night,” Cloud sighs.

This summer, you can pay to get free baking training by Waffle. I, Waffle Pecan, will train you to make my most famous treats, including chocolate chip cookies, vanilla cake, and cheesecake.

In order to qualify for this free training, you simply need to pay $300. Let’s bake some deliciousness!

Campers dance the night away. The night is going perfectly…almost.

Gisselle knows that something is up with one of the campers, Chip Stone.

“I think I’ve figured out his secret…”

The music slows down and Counselor Cora announces that it’s time for one last dance…the dreaded slow dance.

Gisselle sidles up to Chip.

“May I have this dance mon petit frere?”

Gisselle grabs the sleeve of his jacket. “Are you sure? It would be fun.”

He turns away, yet Gisselle is still grasping his jacket. She accidentally (purposefully) removes the jacket from the bear, revealing the three troublemakers.

Gasps erupt from the dance-goers. Had these three really snuck in and crashed their dance?

Sandy walks over. “Excuse me? You boys are going to be in so much trouble!”

“They are so busted!”

Counselor Cora comes over to see what the commotion is about. Gisselle explains the situation.

With a laugh, Cora replies. “It seems to me that you guys have enacted your own form of punishment. You’re starting to feel pretty sore, aren’t you?”

“Why did I let Mischief talk me into this?”

“Well, I suppose I won’t dish out punishment for you. Let this be a lesson not to disobey your leaders.” 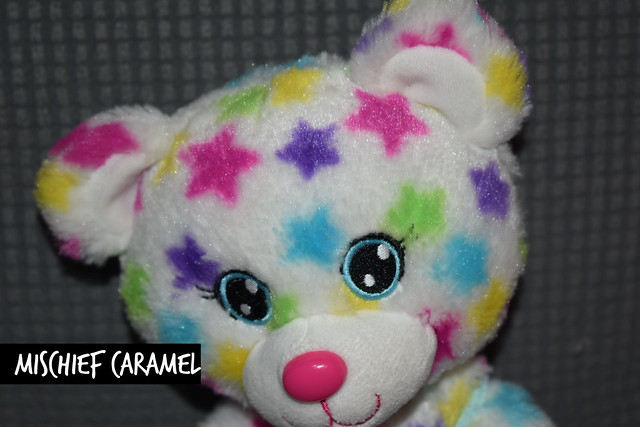 “…Or I’ll just learn how to get better at disobeying. We all know I can’t just quit it altogether.”

I hope you enjoyed that and maybe had a laugh! Stay tuned for the next week of Camp Happy Heart!

Join 445 other subscribers
Follow Build A Bears Furever on WordPress.com

Hey, I'm Diamond. I love sharing stories. Some of my best characters have their own blog featuring them: Build a Bears Furever. It might be "weird" that I have a stuffed animal blog, but to me, they're some of my most vivid and lifelike characters. If you enjoy stories of any genre, I recommend checking that blog out! You can check out my blogs below. I'm obsessed with all things Marvel, including Guardians of the Galaxy and Agents of S.H.I.E.L.D. I also enjoy Star Wars, and Disney. I love to travel, take photos, read, play video games, and I also bullet journal. Check out my blogs if you'd like to know more!